Burj Khalifa is a skyscraper in Dubai, United Arab Emirates.

Burj Khalifa is world’s tallest reinforced concrete tower structure that broke several records during its construction because it was for the first time a tower of this height was attempted. 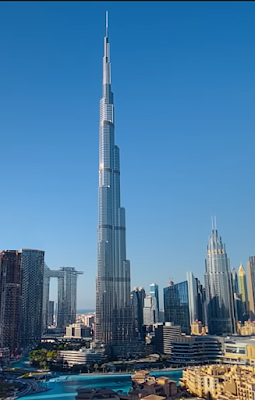 The crowning touch of Burj Khalifa is its telescopic spire comprised of more than 4,000 tons of structural steel.

In addition to concrete and steel, other major materials used are glass, silicone, and aluminum, which make up the outside facade of the tower. 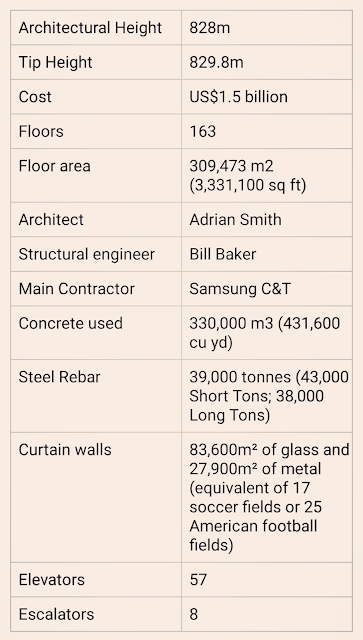 The architectural and structural design for the Burj Khalifa was performed by Adrian Smith and his team of ninety designers at the Chicago office of Skidmore, Owings and Merrill (SOM).

The Burj Khalifa resembles the bundled tube form of the Willis Tower, but is not a tube structure.

The design was based on extensive geotechnical and seismic studies.

The 3.7 m thick raft was constructed in four separate pours, and is made C50 grade self-consolidating concrete (SCC).

The 194 numbers of bored cast-in-place piles, supporting the raft are 1.5 meter in diameter and 43 meter long.

Capacity of each pile is 3000 tonnes.

A cathodic protection system was also installed under the mat, to minimize any detrimental effects of corrosive chemicals, which may be present in local ground water.

High performance SCC concrete with a mix designed to provide a low-permeability and high-durability was used in the walls and columns of Burj Khalifa tower.

Two of the largest concrete pumps in the world were used to deliver concrete: to heights over 600 m in a single stage.

To reduce the cracks due to the high temperatures of Dubai (about 50°C), the concrete was poured at night, when the air is cooler and the humidity is higher, with ice added to the mix.

Special mixes of concrete were made to withstand the extreme pressures of the massive building weight, as is typical with reinforced concrete construction, each batch of concrete used was tested to ensure it could withstand certain pressures.

Burj Khalifa has 57 elevators and 8 escalators. The building service/fireman’s elevator has a capacity of 5,500 kg.

Burj Khalifa’s Observatory elevators are double-deck cabs with a capacity for 12-14 people per cab and it travels at 10 metres per second.

The cladding system is designed to withstand Dubai’s extreme summer heat and to ensure its integrity further.

Nearly 26,000 glass panels, each individually hand-cut, were used in the exterior cladding of Burj Khalifa.

Over 300 cladding specialists from China were brought in for the cladding work on the tower.

The curtain wall of Burj Khalifa is equivalent to 17 soccer fields or 25 American football fields.