CAUSES AND EFFECTS OF EARTHQUAKE

Some of the man-made activities that trigger earthquake are :

The sudden release of strain energy by rupture of the rock at plate boundry (fault plane) is the primary cause of seismic activity around the world.

About 90% of all earthquakes result from tectonic events.

Shallow volcanic earthquakes may result from sudden shifting or movement of magma.

Collapse quakes can be triggered by such phenomena as cave-ins, mostly in karst areas or close to mining facilities, as a result of subsidence.

The convective current (flow) of the mantle material causes the crust and some portion of the mantle to slide on the hot molten outer core. This sliding of the earth’s mass takes place in portions called tectonic plates. 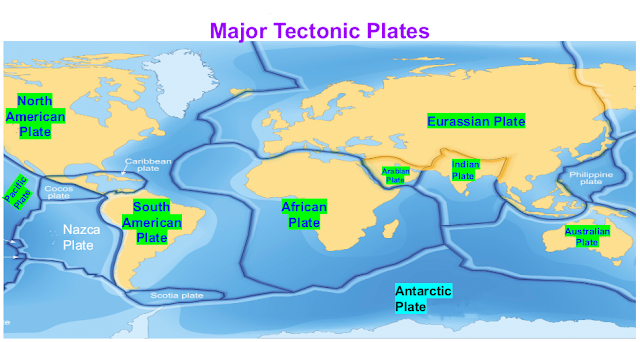 These plates move in different directions and at different speeds relative to the neighboring plates at a rate of 5 to 10 cm per year on the plastic mantle. This movement is called plate tectonics. Sometimes, the plate in the front is slower, than, the plate behind it comes and collides and mountains are formed. 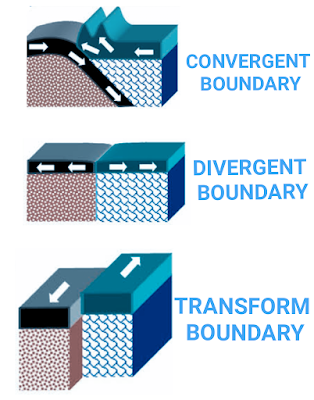 These three types inter-plate interactions are called the convergent, divergent and transform boundaries.

The Himalayas is the example of convergent boundary.

Earthquake epicentres are not evenly distributed over the surface of the earth, but occur predominantly in well defined narrow seismic zones that are often associated with volcanic activity.

These narrow zones are :

i) The circum pacific “ring of fire”

Earthquakes are major hazards and can cause catastrophic damage. Their effects can be classified into two categories.

Effects related with origin of earthquake are known as primary effects. Primary effects are directly connected with geology and topography.

i) Change in topography

Secondary effects are causzed due to passage of seismic waves and are associated with ground shaking.

i) Destruction of human lives

iii) Destruction of dams and bridges

viii)Damage to roads and railway lines.

xiii) Liquefaction of soil and sinking of structures

Do’s and Don’ts – Before, During and After an Earthquake