Environment can be divided in to four components :-

Atmosphere is the mixture of various gases and water vapour and subatomic particles that entirely covers the earth extending outward several thousand kilometers. 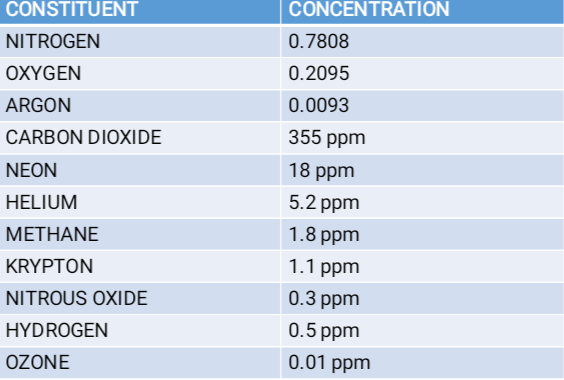 Most of the above values remain practically unchanged with respect to time.

However the concentration of carbon dioxide is increasing by about 1.5 ppm yearly as a result of deforestation and increased air pollution from automobiles and industries.

On the basis of temperature profile and other related phenomena, atmosphere is divided in to five major layers. 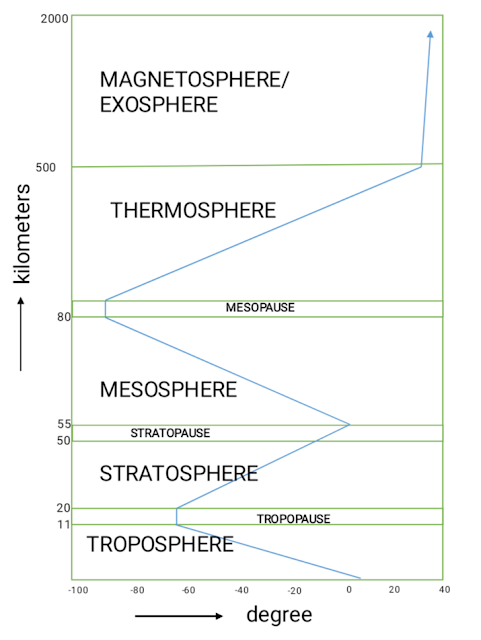 Troposphere is the lower portion of the atmo sphere which extends up to 8 km at the poles and 16 km at equator.

On an average it extends up to 10-11 km from the earth surface.

The temperature in this region decrease at the rate of 6-7 °C/km. There are strong vertical air movements in this region which are responsible for the rapid and complete mixing.

Ozone layer is in this layer.

It is the layer above stratosphere and extends up to 80 km.

Here temperature decreases slowly with altitude but then sharply to about -75° C.

The heating of this layer is due to absorption of the solar energy.

Within the thermosphere there is a layer of charged particles known as ionosphere.

Very little is known about this layer. It exists above the ionosphere and extends up to 2000 km above the carth.

This layer is almost airless and empty. It probably contains hydrogen gas in ionized state.

The hydrosphere is in fact the water environment.

About 70% of carth is covered by water. Water is available in seas, oceans, lake, river, glaciers etc.

It is estimated that the hydrosphere contains about 1360 million cubic km of water out of which 97% is in the oceans and nea, 2% in glaciers and ice caps while remaining 1% of fresh water is available for human consumption.

Water is the main constituent in all the living organism and acts as an important resource for human life.

The outer soil crust of the earth is lithosphere.

The living organisms, plant and vegetation are supported by the lithosphere.

It also contains resources like minerals, organic as well inorganic matter and to some extent air and water.

Lithosphere plays an important role as it not only produces food for human beings and animals, but also the decomposition of organic wastes is carried out by a host of microorganisms in the soil.

Biosphere is the thin outer crust of the earth which includes all the living organisms and their environment.

It extends from the lowest sea bed level to about 24 km of the atmosphere, Thus biosphere consists of lithosphere, atmosphere and hydrosphere.

The living organisms interact with one another in biosphere and sustain their life.

The life supporting resources are also available from the biosphere.

The waste products in gaseous, liquid and solid waste forms are discharge in to biosphere.

Though the sustaining and assimilative capacity of the biosphere is tremendous but it is not infinite.

The system is in operation for millions of years but now it is showing stress, primarily due to impact of human upon environment.