Drip or trickle irrigation is an efficient irrigation method of recent origin, which is becoming increasingly popular in areas of water scarcity and poor quality irrigation water.

In drip irrigation, water is applied frequently at low rates from a low pressure delivery system comprising of small diameter plastic pipes fitted with outlets, called emitters or drippers, on to the land surface near to the plant where the roots grow.

Drip irrigation is advantageous on lands with undulating topography without undertaking major land levelling operations and on slopes where the soil depth is restricted and therefore the crop value is high.

The labor requirement is low in drip irrigation.

COMPONENTS OF A DRIP IRRIGATION UNIT :

The control head consists of an

It is usually located near the source of water, like a water course.

The water is pumped into the overhead tank. The filters are used to remove all debris, sand and clay within the water to stop clogging of the emitters.

Generally, a fertilizer injection system is additionally provided at the control head.

The pipe network consists of a main line and a number of the lateral pipes.

Sometimes submain lines are required between the main line and the lateral pipes. a number of small diameter pipes, called trickle lines, are provided which take water from the lateral pipes and carry it to the roots of the crops.

Generally, there’s one trickle line for every row of crops. All the pipes are usually made from P.V.C. (Polyvinyl Chloride) or polyethylene.

Emitters are provided on each trickle line at an appropriate spacing, depending upon the kind of crop and also the soil conditions.

The spacing is adjusted in order that a wetted strip along the row of crops is created.

Alternatively, the spacing may be adjusted to form a wetted bulb of the soil at every exit point.

The cross-section of the emitter opening should be relatively large to forestall its clogging, even if the discharge is comparatively small. 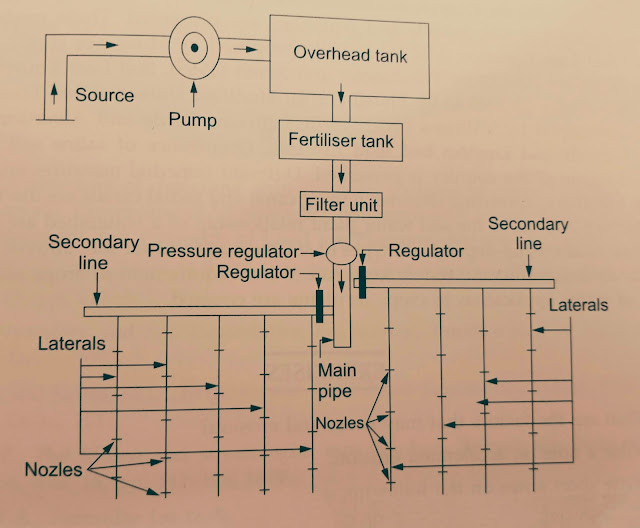 The water from the source is pumped to a storage overhead tank.

Water from this tank is allowed to go through a fertilizer tank and a filter unit.

Then water enters the secondary water line from the main pipe under a pressure regulator and a water regulator.

Laterals with nozzles as shown in the figure are connected to the secondary pipelines.

The laterals are laid on the crop field below the ground surface and water is allowed to drip or trickle through the nozzle within the root zones of the crops.

Following are the advantages of drip irrigation :

Yield increases by 20 to 50% by drip irrigation in comparison to other irrigation methods.

The increase in crop yield is mainly due to the maintenance of optimum soil moisture in the crop root zone throughout the growing period of the crop with the better control of irrigation water application in the drip system.

ii) Improved quality of the harvested produce of the crop :

Drip irrigation results in improved quality of crop produce due to the maintenance of optimum soil moisture conditions in the root zone throughout the growing season, resulting in uniform crop growth.

In addition, damage and loss due to water contact with foliage are eliminated, resulting in better quality of produce.

With the elimination of water application losses such as deep percolation, runoff and evaporation and reduction in the volume of the soil which is wetted (limited to the crop root zone), there is substantial saving in the amount of water required for irrigation, as compared to other methods of irrigation.

Drip irrigation saves 20 to 50% or more water when compared to surface methods of water application.

iv) Increased efficiency in fertilizer use :

The efficiency in fertilizer application increases greatly when fertilizers and nutrients are applied with the drip system, as compared to other methods of water application.

Drip irrigation results in reduced energy requirement in pumping, compared to sprinkler irrigation, due to the low operating pressure required by the drip system.

Also, the quantity of water required for irrigation is low under the drip system, which further reduces the energy requirement.

The labor requirements are low due to reduced cost of field preparation, elimination of fertilizer application as a separate operation, low requirement of weeding and construction of field channels or furrows is also not required.

Wind has no adverse influence on drip irrigation, as compared to the sprinkler system.

In the drip system, the laterals with the emitters are laid at the land surface and only the point of water application is wetted which is not influenced by the wind.

Bacteria, fungi and other organisms are reduced as the application of water is limited only to the crop root zone, the areas surrounding the plant remain dry and hence the weed growth in the crop field is greatly reduced. As a result of which the intensity of pest and disease incidence is reduced.

In clayey soils, with low infiltration rates, low rates of water application can be selected with the drip system to match the soil characteristics.

By Drip irrigation, Hilly and undulating terrain can be irrigated without incurring the expenditure in land levelling.

In drip irrigation water is applied by point source due to which the salts move away from the root zone to the edges i.e. perimeter of wetted bulb formed by the point source of water application and the concentration of salts in the root zone decreases.

xii)  Better uniformity in water application can be achieved

xiii) Drip irrigation system is easy to operate and automation could be easily incorporated.

xiv) The crops grown in green houses can be irrigated by drip irrigation without wetting the walls or the cover.

Following are the disadvantages of drip irrigation system :

The requirements of large quantities of piping and filtration equipment to clean the water makes the Drip irrigation system expensive.

Emitter are of very small diameter and can become clogged easily by suspended materials (sand and silt), precipitated dissolved salts (mainly carbonates), rust and other iron oxides and organic matter (including plant roots, algae and other minute animals).

Due to  Clogging emission rates reduce and it also results in poor uniformity of water application.

Prolonged clogging can cause severe damage to the crop.

Clogging also increases the maintenance costs, as it becomes necessary to check, repair or replace clogged emitters and other components.

The root distribution gets limited to moist zone as by drip irrigation only a part of the root zone is wetted.

In arid regions when high salinity water is used for irrigation, salts tend to accumulate towards the periphery of the wetted zone and the interface between the irrigated and non-irrigated zones in the soil.

As the root zone is kept constantly at high moisture level, there may not be any major impact on the crop, but in the next growing season these salts, if not leached away, may damage the succeeding crop if planted on the interface having the salt patch. Hence artificial leaching is required.