Before analysing the rainfall data of a region, it is necessary to check its continuity.

The data is discontinuous when a particular rain gauge is not operative for some period of the record.

In such a case, it becomes necessary to supplement the missing data by an intelligent estimation.

The missing data is usually estimated from the available data of the neighbouring rain gauge stations called index stations.

The normal rainfall is updated every ten years.

If the rainfall record of a rain gauge station, say X is missing for a relatively long period, such as a month or a year, it can be estimated by comparing the mean annual rainfall of the station with that of an adjoining station A. Thus

When there is a short break in the precipitation data of a rain gauge station, it can be estimated from the observed data of three adjoining index stations A, B and C, which are evenly distributed around the stations X.

The following two cases are dealt with separately :

ii) When the mean annual rainfall at each of the index stations differs from the station X by more than 10%, the normal ratio method is used. Thus

When there are M index stations,

Isohyets are the contours of equal rainfall depth.

An isohyetal map is prepared from the record of various rain gauge stations by interpolation.

The isohyetal map method is suitable for the estimation of the missing data of a station X due to a particular storm.

An isohyetal map is prepared from the data of the various rain gauge stations, and the precipitation of the station X is estimated from the two isohyets between which the station lies. 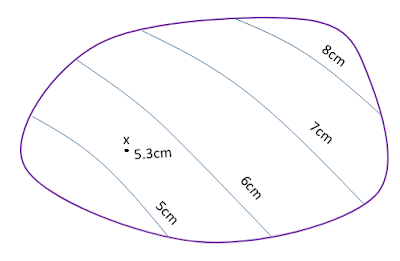 In Figure, the precipitation of station X is estimated as 5.3 cm.