The important factors affecting compaction are,

At low water content, the soil is stiff and offers more resistance to compaction.

As the water content is increased, the soil particles get lubricated.

The soil mass becomes more workable and the particles have closer packing.

At that stage, the air voids attain approximately a constant volume.

With further increase in water content, the air voids do not decrease, but the total voids (air + water) increase and the dry density decreases.

The amount of compaction greatly affects the maximum dry density and optimum moisture content of a given soil.

The effect of increasing the compactive energy result in an increase in maximum dry density and decrease in the optimum moisture content.

However, the increase in MDD does not have a linear relationship with increase of compactive effort. 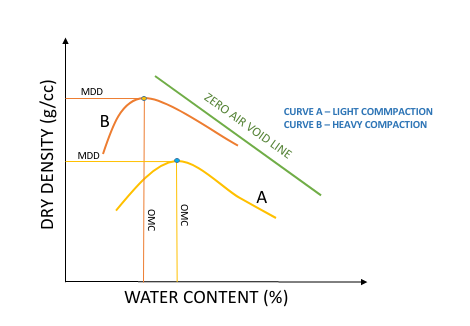 The maximum dry density achieved depends upon the type of soil. 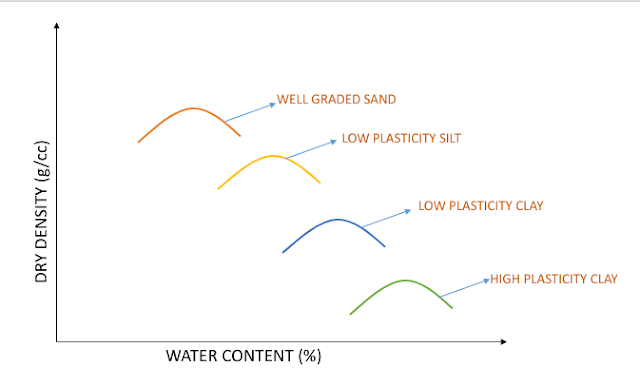 The maximum density and optimum moisture content for different soils are shown in figure.

A well graded sand attains a much higher dry density than a poorly graded soil.

These soils attain a relatively lower maximum dry density as compared with the cohesionless soils.

The dry density achieved also depends upon the method of compaction.

For the same amount of compactive effort, the dry density will depend upon whether the method of compaction utilizes kneading action, dynamic action or stationary action.

In the compaction of soils the thickness of soil layer also play an important role.

If all the air voids are removed from the soil by compaction, the soil becomes fully saturated and higher maximum dry density is achieved.

Practically 100% saturation is not possible.

The compaction characteristics of the soils are improved by adding some admixtures.

The most commonly used admixtures are lime, cement and bitumen.

With addition of aggregates of 20 to 30 mm size up to 40% volume, the density of soil increases.