Soils are formed by weathering of rocks due to mechanical disintegration or chemical decomposition.

When a rock surface gets exposed to atmosphere for an appreciable time, it disintegrates or decomposes into small particles and thus soils are formed.

Soil is formed by geological cycle.

The geological cycle consists of the following stages: 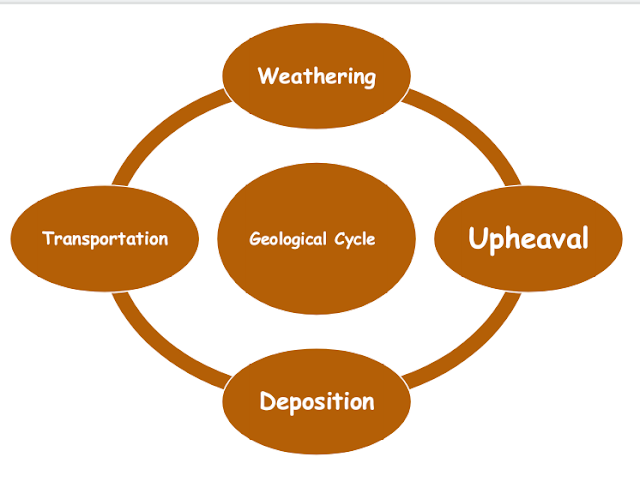 The process by which a rock mass is disintegrated into particulate material is termed as weathering.

The process by which rock disintegrates into smaller fragments due to factors like temperature changes, wedging action of ice, spreading of roots of plants, abrasion, etc. without involving any change in its properties is called Physical or mechanical weathering.

Different minerals of a rock have different coefficients of thermal expansion.

Due to temperature changes, unequal expansion and contraction of these minerals occur, resulting in stresses in rocks and disintegration of the rock particles.

In cold climates, water held in the pores and cracks of rocks gets frozen.

As the volume of ice formed is more than that of water, expansion occurs.

Due to wedging action of the ice formed, stresses are developed in the rocks causing disintegration of rock.

iii) Spreading of roots of plants:

Roots of trees and shrubs growing in the cracks and fissures of the rocks, apply forces on the rock, resulting in disintegration of rocks.

As water, wind and glaciers move over the surface of rock, abrasion and scouring takes place. It results in the formation of soil.

Due to alteration in the chemical properties of rock minerals, new compounds are formed. This is referred to as chemical weathering. The process involved are,

In this process, water combines with the rock minerals and results in the formation of a new chemical compound.

The chemical reaction causes a change in volume and decomposition of rock into small particles.

In this process carbon dioxide in the atmosphere combines with water to form carbonic acid.

The carbonic acid reacts chemically with rocks and causes their decomposition.

In this process oxygen in the atmosphere combines with minerals in rocks.

Oxidation results in decomposition of rocks.

Oxidation of rocks is somewhat similar to rusting of steel.

In this process water soluble rock minerals such as calcuim carbonate are dissolved and washed out from the rocks by rainfall or percolating subsurface water, thus resulting in decomposition of rocks and formation of soils.

It is a chemical process in which water gets dissociated into H+ and OH− ions.

The hydrogen cations replace the metallic ions such as calcuim, sodium and potassium present in the rock minerals, thereby resulting in decomposition of rocks and formation of soils.

As such the soils formed by chemical weathering of rocks do not have the properties of the parent rocks.

Chemical weathing has the maximum intensity in humid and tropical climate.

Biological weathering is the effect of living organisms on the break down of rock.

This involves, for example, the effects of plant roots and soil organisms.

Respiration of carbon dioxide by plant roots can lead to the formation of carbonic acid which can chemically attack rocks and sediments and help to turn them into soils.

Transportation and Deposition of Soil:

The agencies responsible for the transportation of soil particles are,

Swift running water is capable of moving a considerable volume of soil. Soil may be transported in the form of suspended particles or by rolling and sliding along the bottom of the stream. The size of the particle that can be in suspension is related to the square of the velocity of the flowing water. Particles transported by water range. in size from boulders to clay.

Soils that are carried and deposited by water are called alluvial deposits.

Soil particles, carried by rivers while entering a lake, deposit all the coarse particles because of a sudden decrease in velocity. Such coarse soil deposits are called lake deltas.

But, the fine grained particles move to the centre of the lake and settle when the water becomes quiet. Such lake deposits are called lacustrine deposits. These deposits are weak and compressible, and pose problems for foundations.

If coarse and fine grained deposits are formed in sea-water areas then they are called marine deposits.

Large sand dunes are formed by winds. Fine-grained soils, such as silts and clays can be transported by wind in arid regions. Wind-blown silts and clays deposited with some cementing materials in a loose stable condition classified as loess. Loess deposits have low density, high compressibility and poor bearing resistance when wet. The permeability in the vertical direction is large.

Glaciers are large deposits of ice formed by the compaction of snow. As the glaciers grow and move, they carry with them soils varying in size from fine grained to huge boulders. Soils get mixed with the ice and are transported far away from their original position.

Drift is a general term used for the deposits made by glaciers directly or indirectly. Deposits directly made by melting of glaciers are called till.

The landform or topographic surface after a glacier drops the material is called as a terminal moraine.

The land which was once covered by glaciers and on which till has been deposited after melting is called ground moraine. The soil carried by the melting water from the front of a glacier is termed out-wash.

Soils transported and deposited by gravity are called colluvial soils. Gravity can transport material for a short distance. As the movement is limited, there is no appreciable change in the materials moved. Gravity deposits are termed as talus. They include the material at the base of cliff and landslide deposits.

Talus consists of irregular coarse particles. It is a good source of broken rock pieces and coarse grained soils for many engineering works.