Water can exist in gaseous, liquid or solid state. It is circulated on the planet earth mainly by solar and planetary forces.

Because of this circulation, various hydrologic phenomena occur in nature.

This continuous chain of hydrologic phenomena is known as the hydrologic cycle.

The hydrologic cycle is endless, as it has no beginning or end. The water is nature is in continuous motion and moves from one stage to the other. 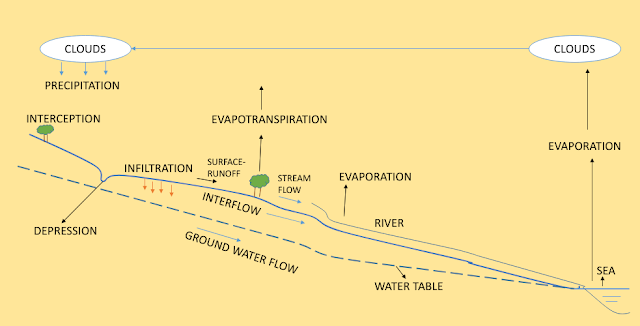 The term precipitation is used to denote all forms of water that reach the earth from the atmosphere as rainfall, snowfall, hail, etc.

A part of precipitation is intercepted by trees and other obstructions. This part is known as interception. It does not reach the ground and ultimately evaporated.

The remaining part of the precipitation reaches the ground.

A part of it is used for filling the small depressions in the ground and is known as depression storage.

A portion of the precipitation reaching the ground percolates into ground and is called infiltration.

A part of the infiltrated water is held by capillarity at or near the ground surface and is ultimately evaporated from the surface.

Another portion is used by vegetation and returned to the atmosphere as transpiration.

Some portion percolates deep into the ground and joins the water table as ground water.

Another portion may drain into the ocean.

The remaining small portion may percolate great depth and appear at distant places as springs, artesian wells and geysers.

A large portion of the precipitation, left after infiltration, flows over the ground into the streams as surface runoff.

The streams flow towards the sea (or the ocean). Some of the water in the stream is evaporated.

Some portion of water is transpired by vegetation along the stream banks.

However, the portion of water which has seeped into the ground may later rejoin the same stream at some point on downstream if the water table becomes higher.

Sometimes this seeped portion may find an outlet in distant springs, streams, lakes or the sea.

Figure shows the hydrologic cycle in a simplified manner.