The terrestrial poles are the two points in which the earth’s axis of rotation meets the earth’s sphere.

The terrestrial equator is the great circle of the earth, the plane of which is at right angles to the axis of rotation. The two poles are equidistant from it.

The millions of stars that we see in the sky on a clear cloudless night are all at varying distances from us. Since we are concerned with their relative distances rather than their actual distance from the observer, it is exceedingly convenient to picture the stars as distributed over the surface of an imaginary spherical sky having its centre at the position of the observer.
This imaginary sphere on which the stars appear to lie or to be studded is known as the Celestial Sphere.
The radius of the celestial sphere may be of any value – from a few thousand metres to a few thousand kilometres. Since the stars are very distant from us, the centre of the earth may be taken as the centre of the celestial sphere.

The Zenith and Nadir: 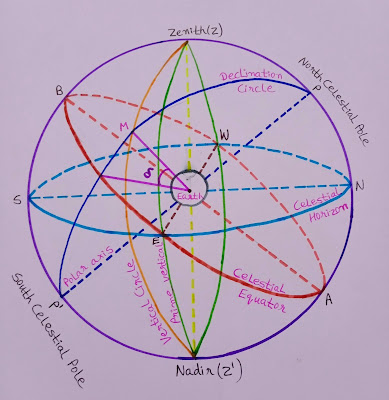 Great circle is a section of a sphere when the cutting plane passes through the centre of the sphere.

The Celestial Horizon is also called True or Rational horizon or geocentric horizon.

It is the great circle traced upon the celestial sphere by that plane which is perpendicular to the Zenith-Nadir line, and which passes through the centre of the earth.

It is a circle in which a plane passing through the point of observation and tangential to the earth’s surface (or perpendicular to the Zenith-Nadir line) intersects with celestial sphere. The line of sight of an accurately levelled telescope lies in this plane.

A vertical circle of the celestial sphere is great circle passing through the Zenith and Nadir. They all cut the celestial horizon at right angles. 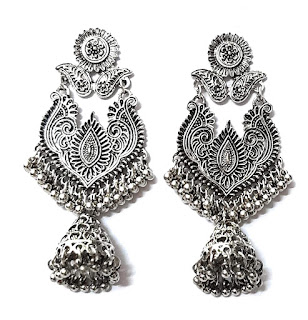 The meridian of any particular point is that circle which passes through the Zenith and Nadir of the point as well as through the poles. It is thus a vertical circle.

It is that particular vertical circle which is at right angles to the meridian, and which, therefore passes through the east and west points of the horizon.

The Co-latitude of a place is the angular distance from the zenith to the pole. It is the complement of the latitude and equal to (90° – θ).

The altitude of celestial or heavenly body (i.e., the sun or a star) its angular distance above the horizon, measured on the vertical circle passing through the body.

The Co-altitude or Zenith Distance (z):

The azimuth of a heavenly body is the angle between the observer’s meridian and the vertical circle passing through the body.

The declination of a celestial body is angular distance from the plane of the equator, measured along the star’s meridian generally called the declination circle, (i.e., great circle passing through the heavenly body and the celestial pole). Declination varies from 0° to 90°, and is marked + or – according as the body is north or south of the equator.

It is the angular distance of the heavenly body from the nearer pole. It is the complement of the declination, i.e., p = 90° – δ.

Hour circles are great circles passing through the north and south celestial poles. The declination circle of a heavenly body is thus its hour circle.

The hour angle of a heavenly body is the angle between the observer’s meridian and the declination circle passing through the body. The hour angle is always measured westwards.

It is the equatorial angular distance measured eastward from the First Point of Aries to the hour circle through the heavenly body.

Elliptic is the great circle of the heavens which the sun appears to describe on the celestial sphere with the earth as a centre in the course of a year. The plane of the elliptic is inclined to the plane of the equator at an angle (called the obliquity) of about 23° 27′, but is subjected to a diminution of about 5″ in a century.