INTERACTION BETWEEN DIFFERENT COMPONENTS OF ENVIRONMENT:

There are four major environmental components or conceptual spheres: 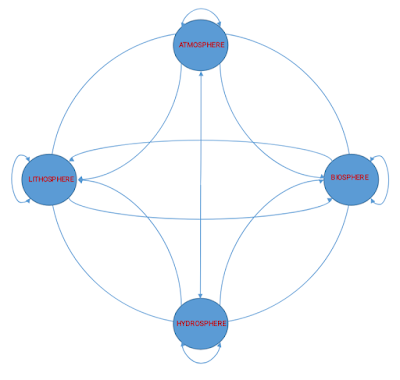 The circles represent the spheres and the curved arrows indicate the flow path of matter.

There is closed, dynamic, inseparable, organic coupling or interrelationship among the environmental components.

Every sphere has two way linkage to every other sphere including itself.

The two way linkage signifies that matter may flow from one component to other in both directions.

Since matter cannot be destroyed or created, the major objective is to find the location and chemical form of the substance at any given time.

The atmosphere may be considered as a transport component that moves substances from atmospheric sources to the receptors.

The hydrosphere may be further classified in to two subcomponents ;

One is conveyor that is a river system which collects the substance within the watershed and delivers them to the second subcomponent that is ocean.

The lithosphere is upper soil crust of the earth. It is composed of soil particles and underlying rocks down to the depth of 50 km.

Within the soil biochemical reactions by microorganisms are responsible for most of the chemical changes of matter.

However, soil and rocks are mainly storage components for deposited matter.

The biosphere is the thin shell on the earth surface comprising of all the living things.

It occupies cast volume of all the spheres but it i the cause of majority of the flow of the matter across the nature.

Weathering through hydrologic cycle, blowing wind and volcanic releaser are some of the mobilizing agents.

The biosphere is responsible for the grand scale recycling of energy and matter on earth.

The mobilization of matter is not restricted to a small area.

For example burning of forest not only changes chemical form of matter but also results in atmospheric transport and deposition.

Some of the biologically released chemicals containing carbon, nitrogen and sulphur have long atmospheric residence times, resulting in continental and global scale redistribution.