The data about the present population of a city under question can always be obtained from the records of the municipality or civic body.

The increase in population of a city depends upon several factors such as living conditions of the city and its environs, industrial potential, state of development, location with respect to road and rail links, climatic conditions etc.

The entire population of a city may not be evenly distributed due to variations in the land use pattern and available facilities etc.

Following are some of the important methods of population forecasts or population projections.

This method is based upon the assumption that the population increases at a constant rate.

i.e. the rate of change of population with time is constant.

from the census data of past 3 or 4 decades, the increase in population for each decade is found, and from that an average increment is found.

For each successive future decade, this average increment is added.

The future population Pn after n decades is thus given by

Pn = future population at the end of n decades

I = average increment for a decade

This method is used for large cities, which have reached their saturation population.

In this method, the per decade percentage increase or percentage growth rate (r) is assumed to be constant, and the increase is compounded over the existing population every decade.

This method is, therefore, also known as uniform increase method.

Hence, the assumed constant value of percentage growth rate per decade (r) is analogous to the rate of interest per annum.

The above geometric increase can be expressed as :

From the census data for the past several decades, the actual increase in each decade is first found.

Then the increment in increase for each decade is found.

From these an average increment of the increase (known as incremental increase) is found.

The process is repeated for the second future decade, and so on.

Thus, the future population at the end of n decade is given by :

I = average increase per decade

It is found that the rate of increase of population never remains constant, but varies.

The population of a city will grow until it reaches a saturation population which is established by economic opportunity.

All population thus grow according to the logistic or S-curve. 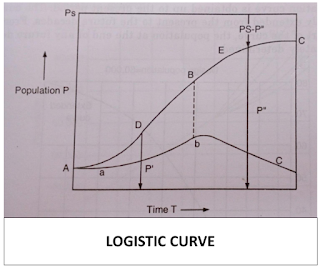 The curve ABC starts with low rate of growth, followed by a high rate and then at a progressively lower rate to the saturation population.

By using the logistic curve analysis population at any time from origin A can be derived as,

P = Population at any time t from origin

In this method, a curve is drawn between the population P and time T with the help of census data of previous few decades, so that the shape of the population curve is obtained up to the present period.

The curve is then carefully extended from the present to the future decades.

From the extended part of the curve, the population at the end of any future decade is approximately determined. 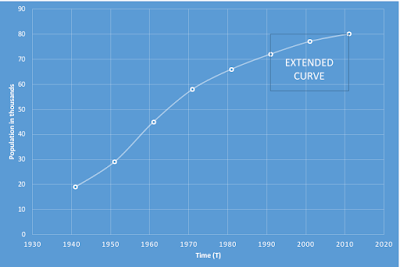 This method is a variation of the previous method.

It assumes that the city under consideration will develop as similar cities developed in the past.

The method consisting of plotting curves of cities that, one or more decades ago, had reached the present population of the city under consideration. 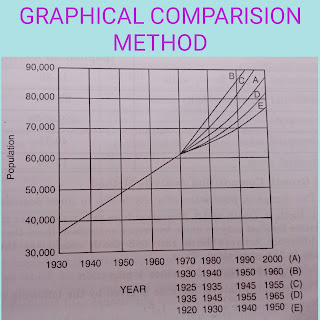 Thus as shown in figure, the population of city A under consideration is plotted up to 1970 at which its population is 62000.

The city B having similar conditions, reached the population of 62000 in 1930 and its curve is plotted from 1930 onwards.

The curve of city A can then be continued, allowing it to be influenced by the rate of growth of the larger cities.

In practice however, it is difficult to find identical cities with respect to population growth.

The expansions of such cities are regulated by various by-laws of corporations and other local bodies.

The master plan prepared for a city is generally such, as to divide the city in various zone and thus to separate the residence, commerce and industry from each other. The population densities are also fixed.

Hence when the development is regulated by such a scheme it is very easy to access precisely the design population.

The change in population of a city is due to three reasons:

from villages or other towns. The population forecast may be made by proper analysis of these three factors. The difference between birth rate and death rate gives the natural

increase in the population.

The estimated natural increase is given by the following expression