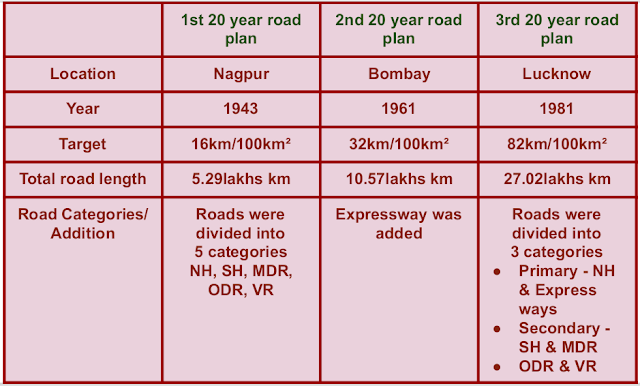 The conference of chief engineers held at Nagpur in 1943 finalized the first twenty year road development plan for india called Nagpur Road Plan for the period 1943-1963.

The road network in the country was classified into five categories :

Recommendations were made for the geometic standards of roads, bridge specifications ind highway organizations.

Two plan formulate were finalized at the Nagpur Road conference for deciding two categories of road length for the country as a whole as well for individual areas.

This was the first attempt for highway planning in India.

The formulae for determining the total road length, proposed in this plan, considers requirements of :

The total length of the first category or metalled roads for national and state highways and major district roads in km is given by :

T = Number of towns and villages with population over 5000

The total length of second category roads for other district roads and village roads in km is given by :

V = Number of villages with Population 500 or less

From the above two formulae, it may be seen that in addition to the road length based on agricultural and non-agricultural areas, specific road length were allocated for towns and villages of different population ranges.

The Nagpur Road Plan was intended for the period 1943-63, but the target road length was achieved earlier in 1961, mainly because of the phased developed that took place in the country during the first two 5-year plans.

Hence the next long term plan for the twenty year period commencing from 1961 was initiated by IRC and was finalised by the sub committee and this was approved by the chief engineers.

Following formulas were formed to calculate the length of NH, SH, MDR, ODR and VR :

A = Developed and agricultural area, km²

The third twenty year road development Plan, 1981-2001, also known as Lucknow Road Plan was finalised and the plan document was published by the year 1984.

The major policies and objectives of this road plan are:

1) The future road development should be based on the revised classification of road system consisting of :

2) The road network should be developed so as to preserve the rural oriented economy and to develop small towns with all the essential facilities.

All the villages with population over 500 should be connected by all weather roads by the end of this century.

4) The National Highway network should be expanded to form square grids of 100 km sides so that no part of the country is more than 50 km away from a NH.

5) Expressways should be constructed along major traffic corridors to provide fast Target length decided was 2000 km.

7) Roads should also be built in less industrialized areas to attract the growth of industries.

8) The existing roads should be improved by rectifying the defects in the road geometrics, widening of pavements, improving the riding quality of the pavement surface, etc.

The road network should be scientifically designed to provide maximum benefits.

Total length of all categories of roads may be assumed to provide an overall density of road length equal to 82 km per 100 km² area by the year 2001.

What is the Importance of Geometric Design of Highway?