Radial collector wells or horizontal wells are employed to get large irrigation supplies from permeable alluvial aquifers with a permanent source for continuous recharge, like gravel formation from banks of lakes or perennial streams or from water logged areas irrigated by canal systems.

The system consists of a vertical concrete cylindrical caisson of about 4 m in diameter and  a wall thickness of 45cm which is sunk into the aquifer by excavating the inside earth material.

The cylindrical caisson is precast in RCC rings on the ground surface preferably with steel form work.

Each ring in lowered under the weight of the next as the earth material is excavated from inside.

When the desired level is reached, it is sealed at its bottom with a thick concrete plug.

The concrete cylinder has precast ports at its bottom end.

Through these ports, a number of radial collectors, 15 to 20 cm in diameters are jacked horizontally into the water bearing Discharge formations.

Perforated pipes with proper screens are later inserted in these horizontal holes. The length of radial collector may be upto 60 m.

Patents for this type of wells were obtained by Ranney, H. Fehlmann,  Preussag, etc.

In the Ranney well, slotted pipe is placed directly in the collector hole.

In the Fehlmann well, a blank pipe is installed first, and then the perforated pipe is placed inside and the blank casing pipe is removed. 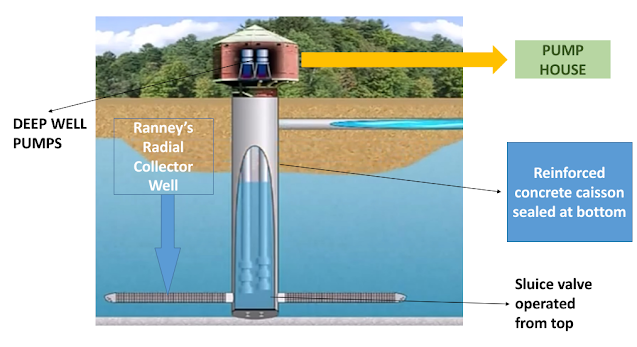 During the development of the well, fines are removed and natural gravel packs are formed around the collector wells.

The location of laterals close to the bottom of the well guarantees elimination of water from the whole water bearing formation above them.

This additionally will increase the effective radius of the well or its circle of influence, resulting in higher yields.

The inner end of each collector well is fitted with a sluice valve which can be operated from the pump house above.

The top of the caisson is raised to an elevation above the maximum flood level. The intake gate valves, operated from top, are installed both for low and high water operations.

The water must percolate into the strainers with an entrance velocity not exceeding 6-9 mm/sec. Hence it prevents the danger of clogging and incrustation due to carbonate deposition.

The water obtained by this method is clean, fresh and biologically pure. It normally does not require any treatment.

The well diameter must be large enough to accommodate the travelling cranes and hydraulic jacks for driving operations.

The initial cost of a radial water collector exceeds that of a vertical tubewell however the large yields acquired under low pumping heads and low maintenance costs decrease its cost per cumec of water lifted.