Human beings, either as pedestrians or drivers, cyclist or motorist, taken individually and collectively, are an essential element to be understood and dealt with in highway traffic. Road user behaviour is affected by both external and internal factors. 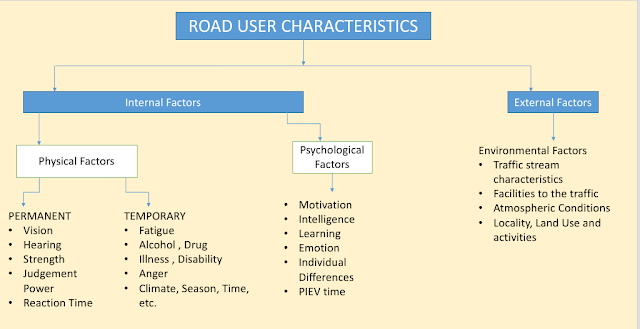 The internal factors can be classified into two categories :

The environmental factors are considered as external factors.

The physical factors are further classified into two types :

Vision is one of the important factors that affects almost all aspects of highway design and safety. The human eye is the sensory organ that enables one to see and evaluate the size, shape and colour of objects and distances and speeds of bodies.

The various aspects of human vision which affect the road user are :

Visual acuity is the indication of the ability of the eye to see under average illumination. Poor visual acuity will directly influence driver’s ability to read traffic signs and will increase his time to respond to them.

Visual acuity diminishes with age. Average visual acuity declines almost 0.5 percent each year after 30 year of age. When placing the traffic signs and symbols, it must be kept in mind that beyond 12° cone the vision becomes blurred.

The field of view within which an individual can see objects, but without clear details or colour is called peripheral vision. It deals with total visual field for the two eyes.

The angle of peripheral vision is about 160° in the horizontal direction and 115° in the vertical direction for static conditions.

Because the road user’s field of vision is limited, it is necessary for him to shift his eyes with movement of traffic to scan areas significant for him.

To obtain clear vision in highway traffic eye makes six different types of movement, all of which take time and consume travel distance.

Third : The eye must follow moving elements in the traffic stream.

Fourth : Both eyes must move harmoniously for the pupils to converge or diverge securing binocular vision on shifting objects in the road ahead. It takes 0.3 to 0.5 sec time.

Fifth : The eye must move to compensate for movement of the head.

Sixth : The eye often moves involuntarily in response to noise and other stimuli.

In artificial illumination a driver loses 6 m of visibility distance for every 15 kmph increase in speed.

Colour is an important factor in perception. Under good light many colours can be differentiated, but as light decreases, the red and blue becomes less visible while yellow remains visible. The different colours have different wavelengths and thus have their relative visibility.

Colour blindness is a condition where one cannot distinguish between different colours. But,it has not been a significant factor in traffic accidents.

Adaptability to light changes is important factor of vision. Eye takes more time to adapt when we go from light to dark. Eye adapts much faster while going from darkness to light.

Because of tunnels, street lighting and head light glare heavy demands are placed on the road user’s adaptability to light changes. Glare recovery time is the time required to recover from the effect of a glare after the light source is passed. It is about 6 seconds when going from light to dark and about 3 seconds when going from dark to light.

vi) Perception of time and space :

Hearing is an aid to road user which can at times be very vital. The sound of a horn or the sound of the nearing vehicle itself can alert a pedestrian to safety.

Elderly by persons with falling eyesight can perceive better through hearing than through seeing. Defective hearing is, however, not a very serious handicap.

Though strength is not an important factor in general, lack of strength may make parking manoeuvres difficult, particularly for heavy vehicles.

The time required to perceive and understand the traffic situation and to take the appropriate action is known as reaction time. It depends on permanent and temporary physical factors as well as psychological factors. Increase in reaction time increases the complexity of the situation.

Ability to judge the coming situation depends upon experience and one’s own judgement power. Before the actual response it is the right judgement of the steps to be taken to avoid the mishaps. Road user’s judgement as a driver or pedestrian is therefore important.

Illness and disabilities are usually compensated for by the driver. However, they produce a tendency or proneness towards more intense emotional reaction.

Anger may also effect the reaction time and judgement. ME FIRST, REFUSE FOR OVERTAKEN, etc.

Climate, season, weather, time of the day, altitude and light may produce complex response in a road user. Oxygen supply varies with altitudes which changes physical and mental efficiency of the driver. Even the colour of light has its psychological effects.

These affect reaction to traffic situation of road users to a great extent.

The main psychological factors are :

But, once the individual enters the traffic stream he is usually motivated by his desires for time-distance economy on one hand and comfort or safety on the other.

How much safety in how much time is a constant question demanding decision by individual road users in their normal traffic operations. While these two stimuli are always present in the individual road user, social motivations arising from rivalry or cooperativeness in the use of the fixed facilities as a group, also manifest frequently.

The capacity of the road user to be aware of external factors pertinent to his behavior in traffic and to adapt and adjust himself in accord with his intents and motives requires a fair degree of intelligence.

It is usually seen that persons with superior intelligence are not as mentally attentive to the task of road use as others, and hence make poorer commercial drivers. However, conclusive correlation between human intelligence and traffic behavior have not been evaluated.

The learning process, while dependent on motivation, intelligence, and other modifying factors, develops the skills, habits and abilities of road users to respond properly to the total environment of traffic operations.

Through the past experience, the road user learns and continues to respond in patterns of behavior which he thus acquires. Learned responses are powerful factors which may be beneficial or harmful in traffic operations.

The attitudes, moods, sentiments and other personality qualities of road users are traits in which emotion is present. For example, the challenge of me first, the spirit of play’ the desire of ‘show off” arise from emotional responses.

Because of the modifying factors of motivation, intelligence, learning and emotion there is a great variation among users of the highway.

But just as there are limits to the range of variation in the height, weight, age and other physical characteristics of human beings, there are limits in the range and there are central tendencies in the traffic performance qualities of the road users.

Failure to recognize the wide range and variability of performance of road users leads to conflicting and eroneous conclusions.

The perception time is the time required for a driver to realise that brakes must be applied. It is the time from the instant the object comes on the line of sight of the driver to the instant he realises that the vehicle needs to be stopped.

The perception time varies from driver to driver and also depends on factors like speed of the vehicle, distance of object and environmental conditions.

According to PIEV theory, the total reaction time of the driver is split into four parts :

Perception time is the time required for the sensations received by the eyes or ears to be transmitted to the brain through the nervous system and spinal chord. As the complexity of the situation increases, the time required to perceive conditions increases.

Intellection is the forming of new thoughts and ideas.

It is the time elapsed during emotional sensations and disturbance such as fear, anger, etc. with reference to the situation.

Emotion may vitally influence or affect the final message which is sent to the muscles to be carried out. This involves the decision making, in which determination is made for proper action (to stop, apply brakes, pass, blow horn, etc.).

Volition time is the time taken for the final action. The will to take some act or produce some action is volition.

In this process the road user finally acts in accordance with his own memories, prejudices, ideals, weaknesses, desires and attitudes.

The PIEV time of a driver depends on several factors such as :

The total reaction time (PIEV time) of an average driver may vary from 0.5 sec for simple situations to as much as 3 to 4 sec for a more complex problem, such as the decision to overtake and pass on a two-lane road.