The sources of water may be classified into two types : 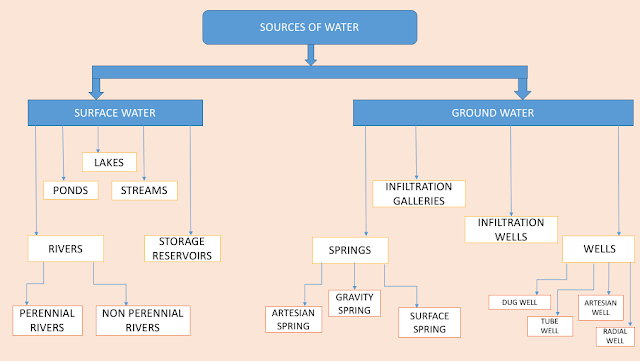 Natural small sized depression formed within the surface of the earth, when gets filled up with water, is known as pond.

A natural large sized depression formed within the surface of earth, when gets filled up with water is known as a Lake.

The quality of a water in a lake is generally good and does not need much purification.

Self purification of water due to sedimentation of suspended matter, bleaching of color, removal of bacteria etc. makes the lake water clean and better.

On the other hand, in still waters of lakes, and ponds, the algae, weed and vegetable growth takes place freely, imparting bad smell, tastes and colors to such waters.

In hilly regions, generally small amount of water runs off towards the earth.

These small run-offs are known as streams.

These streams feed their waters to lakes or rivers.

Quantity of water available in them is very small and sometimes they may even sometimes go dry.

Rivers are born from the hills when number of streams combine together.

Rivers are the most important sources of water for public water supply schemes.

There are two types of rivers :-

Those in which water is available throughout the year.

Fed by rains during rainy seasons and by snow during summer seasons.

It is a source of public supplies directly.

Those in which water is not available at all time.

Fed by rains during rainy seasons.

The construction of a dam is generally adopted and water is used for irrigation and hydropower etc.

The quality of water obtained from rivers is generally not reliable, as it contains large amounts of fine silt and clay, and lot of other suspended matter.

So a proper treatment is required before using it. Rivers have been used as source of water supply for many cities and town all around the world.

These are formed by constructing hydraulic structures like dams across the river.

That stored water is generally used for irrigation and hydropower.

When underground water reappears at the ground surface percolation or by underground pressure, it is known as spring.

The water of the spring may contain some type of salts or minerals.

So, it should treated before use.

If required, the water should be treated to make suitable for drinking.

This source is suitable for water supply in hill town.

There are different types of springs :

When a pervious layer is sandwich between two impervious layers in the form of a valley, then the artesian spring comes in to existence.

The water oozes out under pressure.

These springs are able to provide almost uniform quantity water so it can be thought as the possible sources of water supply.

The gravity spring comes into existence when the water table rises along the hill slope and water finds a pan (i.e. a pervious zone) on the slope through which it rushes o by gravity.

The discharge of water from such spring is variable as the water table may rise or fall in different seasons.

A trend is constructed just below the spring for tapping water.

When subsoil water forms a storage due to presence of impervious layer in the form of a valley, then the surface spring comes into existence.

A cutoff wall is constructed on the impervious layer to form a reservoir from where water is supplied to the consumers.

For tapping water from sandy river beds sometimes horizontal tunnels are constructed at a shallow depth of (4 to 6 m) in the beds. 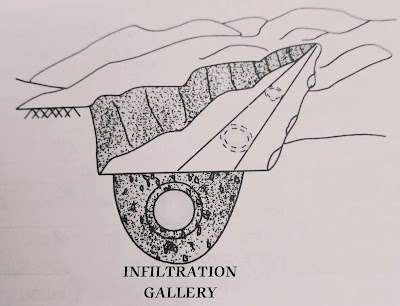 The walls of the tunnel are constructed with brick work and its top is covered with the RCC slab having manholes at some interval.

These are connected to the tunnel through which the water gets collected inside perforated the tunnel.

This tunnel is known as infiltration gallery.

The perforated pipes are generally covered with gravel so as to prevent the entry of the pipe lines fine sand particles into the pipe.

The slope of the gallery is much that water inside the gallery flows towards a well which is known as sump well.

Finally, the water from the sump well is pumped out and stored in a storage reservoir.

The quality of water is good and it requires no treatment or only disinfection.

These are constructed using brick masonry with open joints.

The water percolates through these joints and gets collected in the wells.

The top of the wells are covered with R.C.C slab having manhole for inspection.

The water from the infiltration well gets collected in a jack well.

Then the water from the jack well is pump out and stored in a storage reservoir.

The quality of water is good and requires no treatment or only disinfection.

The quantity of water from this source is suitable for small water supply schemes.

A water well is a hole usually vertical, excavated in the earth for bringing ground water to the surface.

a) Dug wells or open wells :

Open wells are generally open masonary wells, having bigger diameters, and are suitable for low discharges of 1-5 lit/second.

The diameter of open wells generally varies from 2 to 9 m and generally less then 20 m in depth.

The yield of an open well is limited because it can be excavated only to a limited depth, where the ground water storage is limited.

It is a long pipe or a tube.

It is bored or drilled deep into the ground, intercepting one or more water bearing stratum.

In the tube wells, larger discharges can be obtained by getting a higher velocity as well as a larger c/s area of the water bearing stratum.

When a well is constructed in a pervious layer which is bound between two impervious layer, the water comes on the surface with some pressure at which it is stored in the layer.

It is a special type of well in which surface water is collected from the river bed.

Radial perforated pipes are laid with slope towards the center below the bed level of the river.

A well will collect the water de the center and then it is pumped out with the help of a pump.