Surveying is the art and science of determining the relative position of various points or stations on, above or beneath the surface of the earth by measuring the horizontal and vertical distances, angles and using the details of these points to prepare a map or plan to any suitable scale.

The knowledge of surveying is advantageous in many phases of engineering.

The earliest surveys were made in connection with land surveying.

Before plans and estimates are prepared, boundaries should be determined and the topography of the site should be ascertained.

After the plans are made, the structures must be staked out on the ground.

As the work progresses, lines and grades must be given.

In surveying, all measurements of lengths are horizontal, or else are subsequently reduced to horizontal distances.

The object of a survey is to prepare plan or map so that it may represent the area on a horizontal plane.

A plan or map is the horizontal projection of an area and shows only horizontal distances of the points.

Vertical distances between the points are, however, shown by contour lines, hachures or some other methods.

Primarily surveying can be divided into two classes : 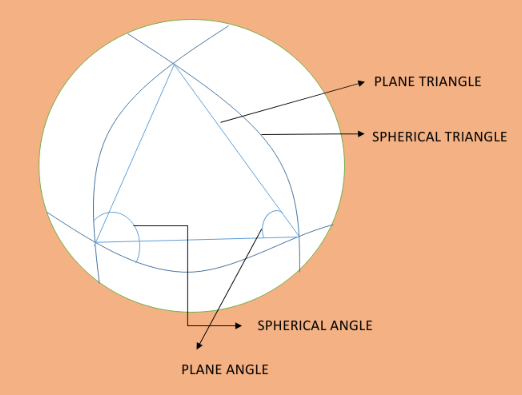 Plane surveying is that type of surveying in which the mean surface of the earth is considered as a plane and the spheroidal shape is neglected.

All triangles formed by survey lines are considered as plane triangles.

The level line is considered as straight and all plumb lines are considered parallel.

Geodetic surveying is that type of surveying in which the shape of the earth is taken into account.

All lines lying in the surface are curved lines and the triangles are spherical triangles.

All geodetic surveys include work of larger magnitude and high degree of precision.

The object of geodetic survey is to determine the precise position on the surface of the earth, of a system of widely, distant points which form control stations to which surveys of less precision may be referred.