TYPES OF INTAKES | COLLECTION OF RAW WATER FROM SOURCE 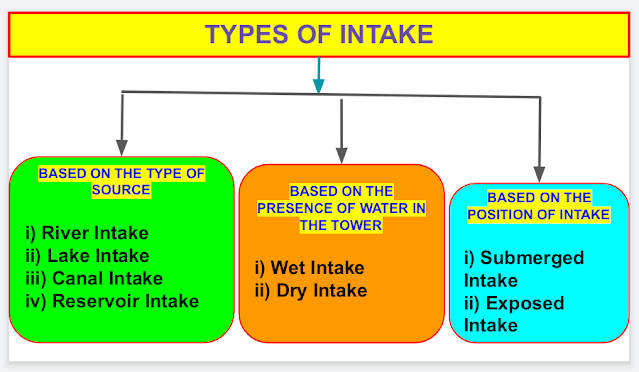 (1) According to the type of source :

The source of raw water may be river, lake, canal or reservoir.

Depending on these source there are different types of intake like.

A river intake is found on the upstream side of the town to urge comparatively better quality of water.

They’re either located sufficiently inside the river so as that necessary demand of water are often met altogether the seasons of the year or they’ll be located near the river bank where a sufficient depth of water is out there .

Sometimes, an approach channel is formed and water is to the intake tower. 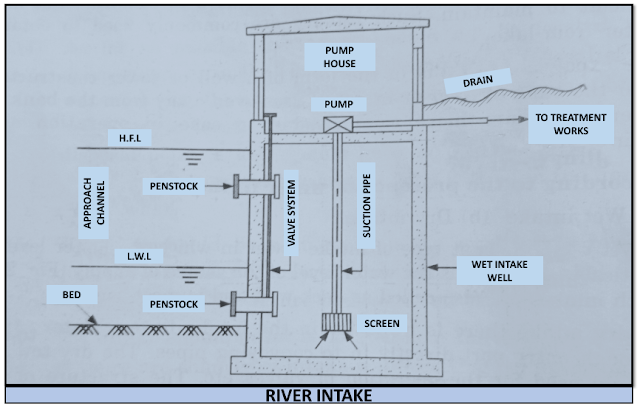 The intake tower permits the entry of water through several entry ports located at various levels to affect the fluctuations within the water level during different seasons.

These entry ports are also called as penstocks.

The penstocks are covered with the suitably designed screens to prevent the entry of floating impurities.

The entry ports contain valves which can be operated from the upper a neighborhood of the well.

The lowest entry is placed at the low water level of the river, so as that the water is out there within the jack well during summer season also when river carries minimum discharge.

The intake well should be founded in sound footing, to a depth deeper than the scour depth.

The upper portion of the well is the pump house. The suction pipe admits water through a screen. 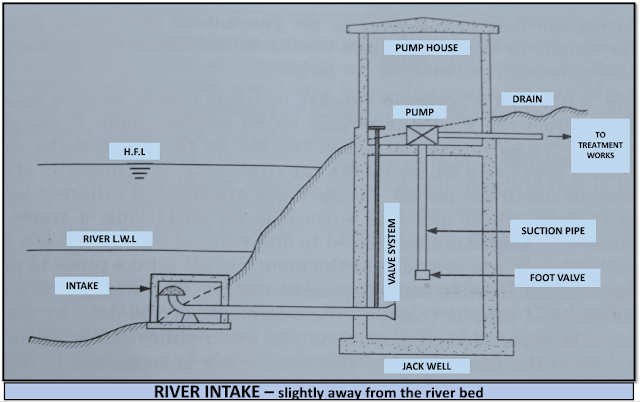 When river bed is soft or unstable, the intake tower could even be founded slightly away from the river bed as shown is figure.

The intake is kept submerged under the low water level of the river.

It consists of an oblong or circular entry chamber with a strong grill at its top.

The pipe conveying water from the intake to the jack well features a bell mouth entry with a screen and is supported on a concrete support.

Water enters the jack well through the valve which can be controlled from the pump house.

Lake intake are mostly submersible intake. These intakes are constructed within the bed of the lake below the low water level so on draw water even in season .

It mainly consists of a pipe laid within the bed of the lake.

One end of the pipe which is within the center of the lake is fitted with bell mouth opening covered with a mesh and guarded by timber or concrete crib. 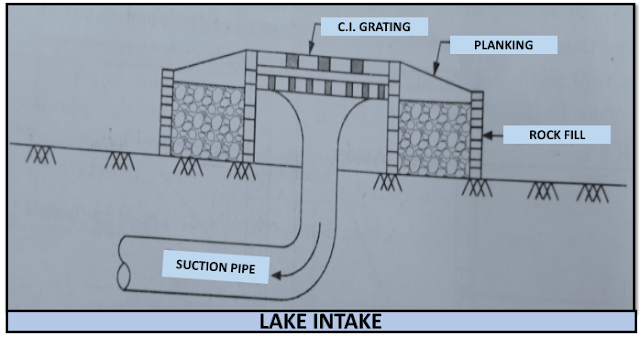 The water enters within the pipe through the bell mouth opening and flows under gravity to the bank where it’s collected during a sump well then pumped to the treatment plant for necessary treatment.

If one pipe isn’t sufficient two or more pipes could even be laid to urge required quantity of water.

Advantages of this intake are :

(1) There is no obstruction to navigation.

(3) There is no danger of floating bodies.

In case of alittle town a close-by irrigation canal are often used because the source of water.

The intake well is typically located within the bank of the canal.

Since water level in canal is more or less constant there is no need of providing inlets at different depth. 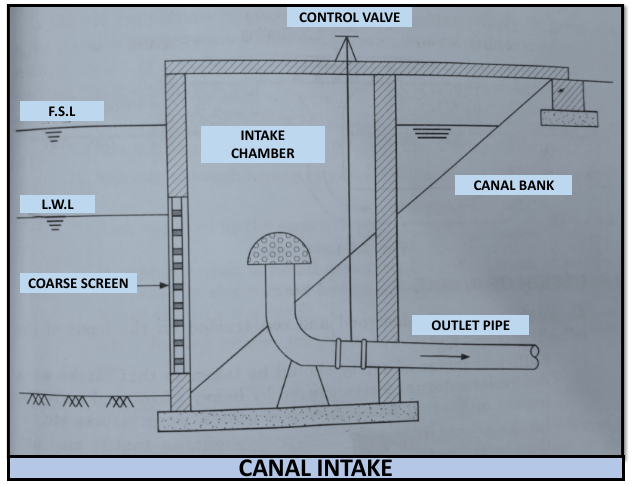 The entry of water within the intake well takes through a rough screen, the very best of which is typically provided at minimum water level within the canal and bottom is about 0.15 m above the canal bed to avoid the entry of bed load.

An extra Hemispherical fine screen is provided over the bell mouth entry of the outlet pipe.

The bell mouth entry is found below the expected low water level within the canal.

An outlet valve operating from top is provided to manage the entry of water into the outlet pipe.

So canal should be lined on upstream and downstream side of the intake to prevent erosion of sides and bed of canal.

When the flow within the river isn’t guaranteed throughout the year (especially in summer), a dam is formed across the river to store the water within the reservoir so formed. 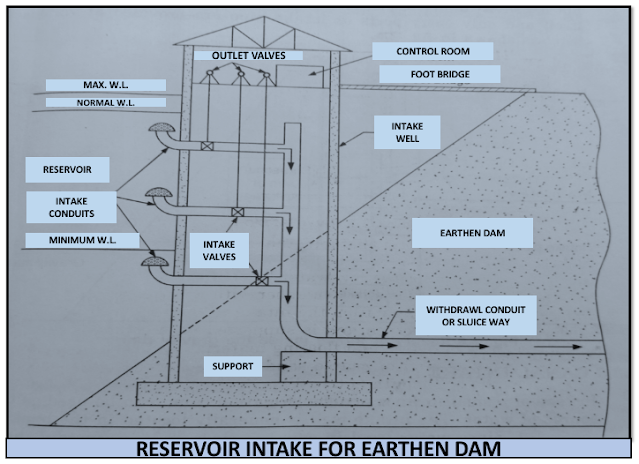 Figure shows a reservoir intakes which is typically used to draw the water from the reservoir formed by an earthen dam.

It essentially consists of an intake tower constructed on the slope of the dam at such a neighborhood from where intake can draw sufficient quantity of water even within the driest period.

Intake pipes are fixed at different level, so on draw water near the surface altogether variations of water level.

These inlet pipes are connected to a minimum of one vertical pipe inside the intake well.

Screens are provided at the mouth of all intake pipes to prevent the entry of floating and suspended matter.

The water which enters the vertical pipe is taken to the other side of the dam by means of an outlet pipe.

At the very best of the intake tower sluice valves are provided to manage the flow of water.

The valve tower is connected to the very best of the dam by means of a foot bridge or gang way for reaching it. 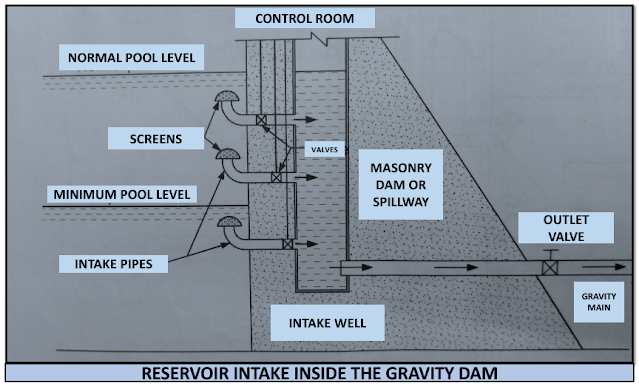 In the case of gravity dam (RCC or masonry) intake tower is constructed inside the dam itself and only entry ports or intake pipe are provided at various level as shown in figure.

(2) According to the position of intake :

The submerged intake structures are those which are constructed entirely under water.

They an less expensive to construct but are difficult to maintain.

Such intakes are commonly used to obtain water from lakes.

They are more common due to ease in operation and maintainance.

(3) According to the presence of water in the tower :

Such intakes are also called as Jack well and is most commonly used.

In dry intake there is no water in the intake tower.

Water enters through entry port directly in to conveying pipes.

The dry tower is simply used for the operation of valves etc.

The structure of this intake is massive to resist the greater buoyancy force of outside water when withdrawal conduits are empty.