Sediment entering a canal can be controlled in a variety of ways. A large storage reservoir built on the stream automatically traps all coarser fractions of sediment and a large percentage of finer fractions.

A canal supplied from such a reservoir will therefore have water which is free from sediment. While such a reservoir is s constructed across nonperennial streams, the development on perennial rivers normally s usually envisages the construction of a low weir or a barrage to control the water level and divert the flow into the canal. 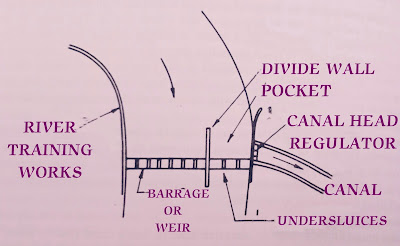 The lake upstream of such barrages does not trap much sediment load and the canal is likely to be heavily charged with sediment. However, attempts are usually made to locate and construct the headworks in such a manner that the amount of sediment load entering the canal is small.

A favourable location for the head regulator from sediment consideration is on the outside of a river bend. While discussing the hydraulics of channel-bifurcations and hydraulics of stream-bends, it has been emphasized that as the water flows around a curved path, helicoidal flow is developed, as a result of which slow moving bottom-layers of the water (having high sediment concentration of bed load) are deflected towards the inside of the bend. Hence a channel taking off from the outer bank draws relatively sediment-free water. This principle of curved currents is made use of in locating the canal head regulator on the concave side of the bend. Sometimes even artificial curvature is induced to reduce the amount of sediment entering the canal.

The sediment entering the canal is also controlled by providing such devices as divide walls, raised sills, undersluices, cantilever platforms and river.

There are three methods of barrage regulation that are in vogue in India; these are:

In the still pond system of barrage regulation, the undersluices are kept closed so long as the canal is flowing. The velocity of flow in the pocket is thus small and further the divide wall helps in separating the main flow in the river from the flow in the pocket.

Reduction in velocity in the pocket results in deposition of coarse material and sediment-free water is drawn by the canal. When the gates are closed and the canal regulator is working, the curvature is conducive to exclusion of sediment from the canal.

After some period of still pond operation, sediment gets deposited in the pocket and the canal starts drawing sediment. Under such conditions, the canal is closed and the deposited material is scoured away by opening the undersluices.

In the semi-open flow system, the undersluice gates are kept partially open while the canal is flowing. This decreases the value of ratio of velocity of river to velocity of pocket and hence brings more sediment into the pocket.

Even if devices to control the amount of sediment entering the canal are provided, it is sometimes found that an unacceptable quantity of coarse sediment still enters the canal.

This is removed by making use of devices such as settling basins, vortex tubes, tunnels, siphon extractors, etc. These structures are constructed in the canal downstream of the head regulator.

The methods of sediment control can be broadly classified into two categories depending on whether the control is effected at the canal headworks or in the canal downstream.

Wherever possible, an attempt is made to exclude the sediment from the canal at the headworks. This method is preventive and the device used for this purpose is known as excluder.

If it is not possible or practicable to remove all coarse material entering the canal at the headworks, some structures can be built in the main canal to extract the excess sediment from it. This method is curative and the structure used for this purpose is known as ejector.

In some cases both the excluder and the ejector (or extractor) are required to control the sediment load in the canal. Whatever method is employed for controlling sediment, some water is always wasted in the process; hence water requirement for sediment control assumes importance in many cases, if not in all.

Efforts are made to remove only the coarse fraction of sediment, which will either deposit in the canal or is harmful to turbines.

It is not desirable to remove silt and clay as they are beneficial from the agricultural viewpoint and they are also extremely expensive and difficult to remove. In general only sedi ment coarser than 0.072 mm is removed.

It must, however, be emphasized that along with the minimum size there must be a limit on the permissible concentration of fine material.

If silt and clay sizes are present in large amount, they must be removed no matter how expensive it is to remove them.

Consideration must also be given to the quantity of coarse sediment to be removed; if too little sediment is supplied to an alluvial channel, the water will pick up more sediment from the bed and banks and degradation will result.