EFFECT OF COMPACTION ON SOIL PROPERTIES :

The main aim of compacting a soil is to improve some desirable properties of the soil, such as reduction of compressibility, reduction of permeability, increase in shear strength and bearing capacity etc.

The effect of compaction on various soil properties is discussed below:

The structure of a soil during compaction depends upon,

However, the structure of composite soils after being compacted depend upon the relative proportion of coarse particles and fines and their structure can be either coarse grained skeleton structure or cohesive matrix structure.

Soils compacted at a water content more than the optimum wa content usually have a dispersed structure. 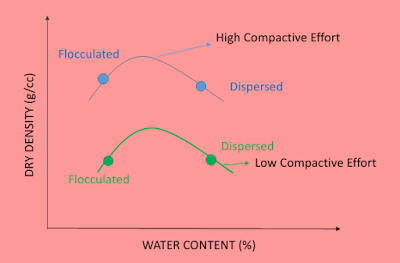 Fig. Effect of Compaction on Structure of Clay

The permeability of soil decreases with an increase in water content on the dry side of the optimum water content.

As the dry density increases due to compaction, the voids go on reducing and hence the permeability goes on reducing.

If the compactive effort is increased, the permeability of soil decreases dry density and better orientation of particles.

The soils compacted wet of optimum shrinks more because the soil particles in the dispersed structure have nearly parallel orientation of particles and can pack more efficiently.

It imbibes more water than the sample compacted wet of the optimum, and has more swelling.

The flocculated structure developed on the dry side of the optimum offers greater resistance to compression than the dispersed structure on the wet side.

Consequently, the soils on the dry side are less compressible.

However, the compressibility of the soil depends upon a number of other factors.

It increases with an increase in the degree of saturation.

If the compaction causes very large stresses, the compressibility increases due to breakdown of the structure and greater orientation of the particles. 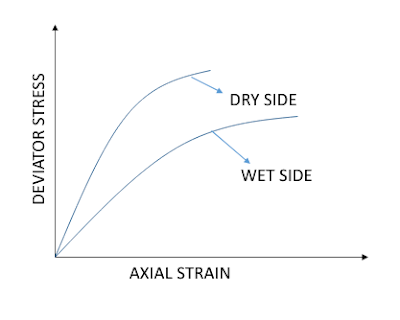 The soils compacted dry of the optimum have a steeper stress-strain curve than those on the wet side as shown in figure.

The modulus of elasticity for the soils compacted dry of the optimum is therefore high.

Such soils have brittle failure like dense sands or over consolidated clays.

The soils compacted wet of optimum have plastic failure.

The shear strength of compacted clays depend upon :

Two samples are compacted to the same density, one at dry of optimum and the other wet of the optimum, and tested for shear strength. 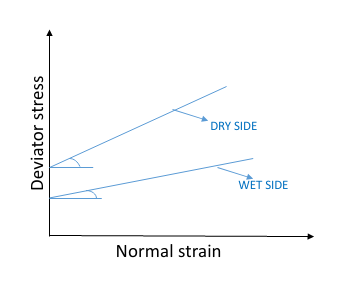 The soils compacted dry of optimum have a higher shear strength at low strains.

At higher strains, the flocculated structure of the same compacted on the dry side is broken, giving rise to ultimate strength for the samples.