A storm over a particular catchment does not produce uniform rainfall depth over the entire catchment.

Each storm usually has its centre called the eye where the precipitation is maximum.

As the distance of a point from the eye increases, the precipitation decreases.

Thus the average depth of precipitation decreases as the area of the catchment increases.

The average depth of precipitation decreases exponentially with an increase in area.

The relationship is usually expressed as :

where P0 is the highest amount of precipitation at the storm centre and A is the area of catchment. K and n are the constants of the catchment.

Because it is very unlikely that the storm centre will be located at the raingauge station, it is not possible to determine the exact value of  P0 from the rainfall record.

It is the usual practice to take P0 as the average depth of precipitation over an area of 25 km² near the storm centre. 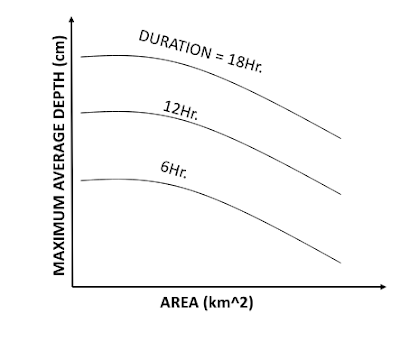 A semi-log paper is commonly used.

The depth area duration curves are abbreviated as DAD curves.

The following points may be noted :

1) The maximum average depth of precipitation for a storm of given duration decreases with an increase in area.

2) For a given area, the maximum average depth increases with the duration of the storm.

3) DAD curves are extremely useful for the development of design storms required for computing the design flood for spillway and other hydraulic structures.

Preparation of DAD curves is quite complicated. It involves considerable computational work and requires detailed meteorological and topographical data of the region.

The data of the severest storms which occurred in the past are needed.

A brief description of the method is given below. This simplified method can be used for the preparation of approximate DAD curves for storms occurring over a small region and having a single storm centre.

i) Collect the data for the severest storms of different durations which have occurred in the region.

ii) Prepare the isohyetal map and mass curves of these storms.

iii) Distribute the total depth of rainfall in successive increments of time (usually 6 hours) in accordance with the distribution recorded at the rain gauge station situated near the storm centre.

iv) Draw the isohyetal map for each increment of depth of rainfall. For a storm with a single centre, the isohyets are taken as the boundaries of individual areas. Determine the areas enclosed by different isohyets.

v) Take the isohyets of one duration (say 6 hours) and compute the average precipitation within the innermost isohyet.

vi) Determine the average precipitation over the area enclosed by the next isohyet including the area of the innermost isohyet.

vii) Repeat the step vi) for other isohyets, and thus determine the maximum average rainfall different sizes of the area.

viii) Repeat steps v) to vii) for isohyets of other durations.

ix) Draw the enveloping curves for different storms to obtain the DAD curves. A semi log-paper is used. The areas are plotted on log scale.