Apr 14, 2021
MASS RAINFALL CURVE
The mass rainfall curve is a plot between the accumulated rainfall at a station as ordinate and time as abscissa, plotted in chronological order. 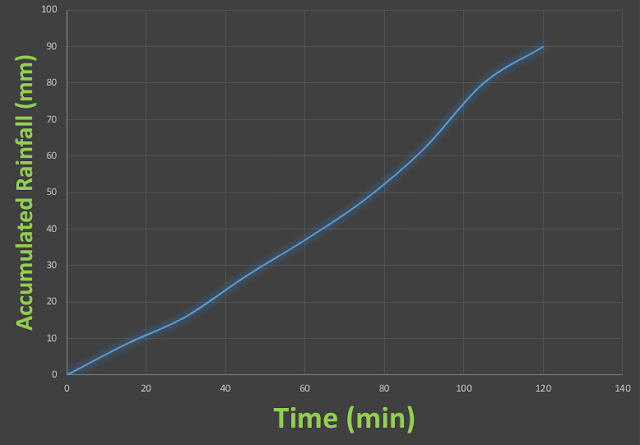 The recording type rain gauge gives directly the mass curve.
The mass curve of a non-recording rain gauge can be prepared from the knowledge of the beginning and the end of the storm, and distributing the total depth of rainfall over the various periods according to the mass rainfall curves of the adjacent recording raingauge stations.
However, such a mass curve is approximate. The mass curve is useful for the determination of the intensity, amount, and duration of the rainfall.
The amount and duration of the rainfall are obtained directly from the curve. The tangent to the mass rainfall curve at any point gives the rainfall intensity. Thus,
Rainfall Intensity i = dP/dt
The intensity is usually expressed as mm/hr or cm/hr.
HYETOGRAPH
The hyetograph is a bar diagram plotted between the average intensity of rainfall as ordinate and the time as abscissa. 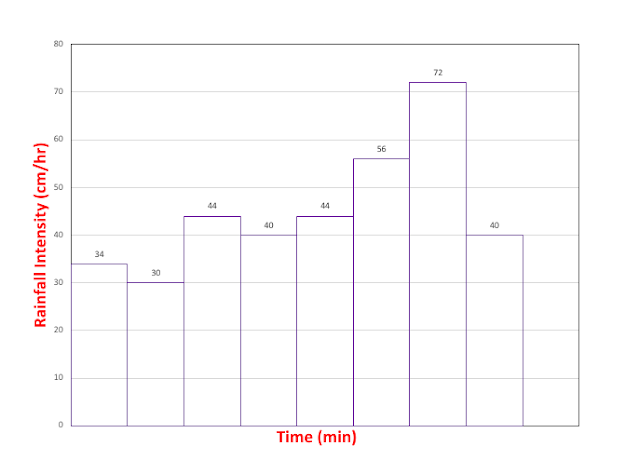 The hyetograph is obtained from the mass rainfall curve. The intensity of rainfall used in a hyetograph is not determined by drawing the tangents to the mass curve. Generally, a constant time interval is chosen and the average intensity is determined from the increment of the rainfall. Thus,
Average Rainfall Intensity = ΔP/Δt
The time interval chosen depends upon the required accuracy and on the storin duration. The smaller the time interval, the greater is the accuracy.
The storms of short duration are usually analysed for an interval of one hour or less; but for the storms of long duration, the interval may be 6 hour or more.
The area under the hyetograph gives the total rainfall occurred in that period.
The hyetograph is commonly used in practice. It is more useful than a mass rainfall curve because a larger vertical scale is usually adopted. Moreover, it is quite convenient to determine the area hyetograph.